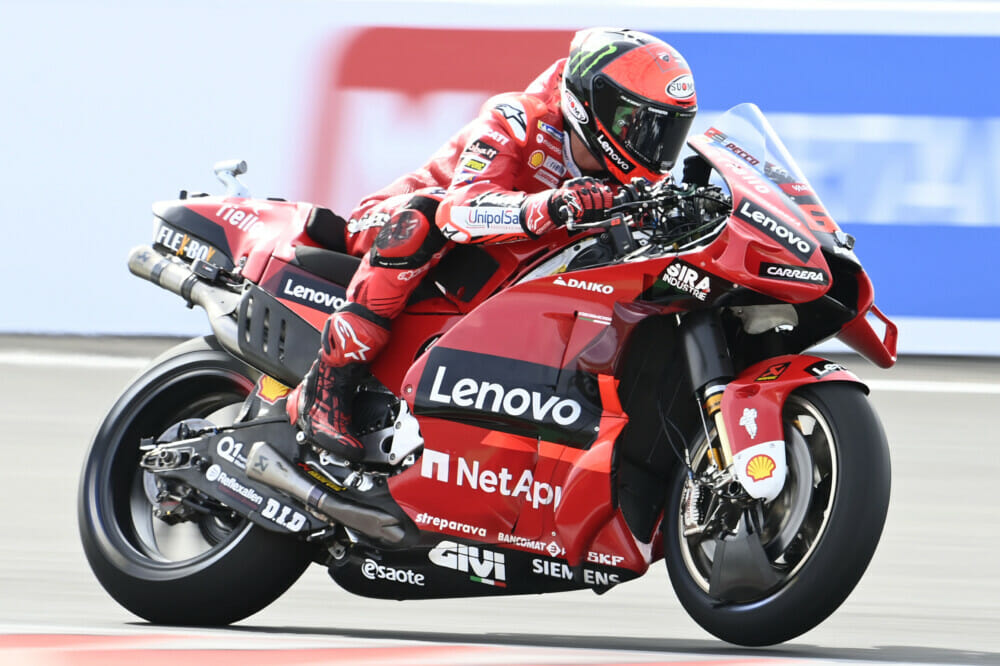 Despite freight issues that led to the cancellation of Friday’s action, paddock bosses were confident the plane grounded in Kenya would finally arrive in Argentina on Friday evening. Of them MotoGP the teams – Gresini Ducati and VR46 Ducati – have no bikes or team equipment. Ducati planned to loan technicians to the affected teams to clean and rebuild the bikes before the start of FP1 at 12.30pm on Saturday.

Red Bull KTM’s Miguel Oliveira was also affected as he is missing one bike, while Tech 3’s Raul Fernandez is missing two. “We have to condense the activity for Saturday, which will be different and a challenge,” Oliveira said. “Mostly for the mechanics, but I’m just glad we can do something (after the delay).”

The news that front ride height devices, currently only used by Ducati’s GP22, will be banned from 2023 unsurprisingly sparked frustration from factory management.

“Obviously we are disappointed,” said sporting director Paolo Ciabatti. “We did our best to keep something in the regulations that can be used. We spent time and money developing it last year while our competitors spent their time trying to develop something else. We think this is very unfair. It’s a story that repeats itself, from the fins to the rear tire spoiler.

“In this case, I have heard motivations with which we do not agree. The cost – we know it is fully compatible with our budget. Some manufacturers spend large sums on their runners. It’s p for them. But I don’t think they should criticize the fact that we’re spending a lot less money on development. We’ve heard about security, but we don’t take it for granted.

The war between Honda and Michelin rumbles

The days following the Indonesian GP were marked by a war of words between Honda and tire supplier Michelin. The French firm’s decision to bring in an older rear tire design to cope with the high track temperatures severely affected the performance of all four Honda machines, with Marc Marquez suffering a highside that ruled him out of two races.

In Argentina, the Honda riders made another comment. Michelin two-wheel motorsport manager Piero Taramasso said comments from Repsol Honda team boss Alberto Puig, in which the Spaniard said he had to “analyze the situation with Michelin”, were “unnecessary”.

But the Honda riders wanted to make sure a repeat of Indonesia didn’t happen again in the future. “It’s something they need [improve] for the future,” said Alex Marquez. “Something that can’t happen again. To suddenly change the tire allocation, we had been there for three days of testing, because they asked for three days there to test the tires. We saw very clearly that the tires didn’t hold up for 27 laps.

“For the future, I think it will be interesting not to change the allocation like that with the carter. If the tires can’t handle 27 laps, shorten the run or flag to flag like we’ve seen in the past. But changing the distribution is not really fair. In testing we also had blisters in the front (which were not modified for the GP).