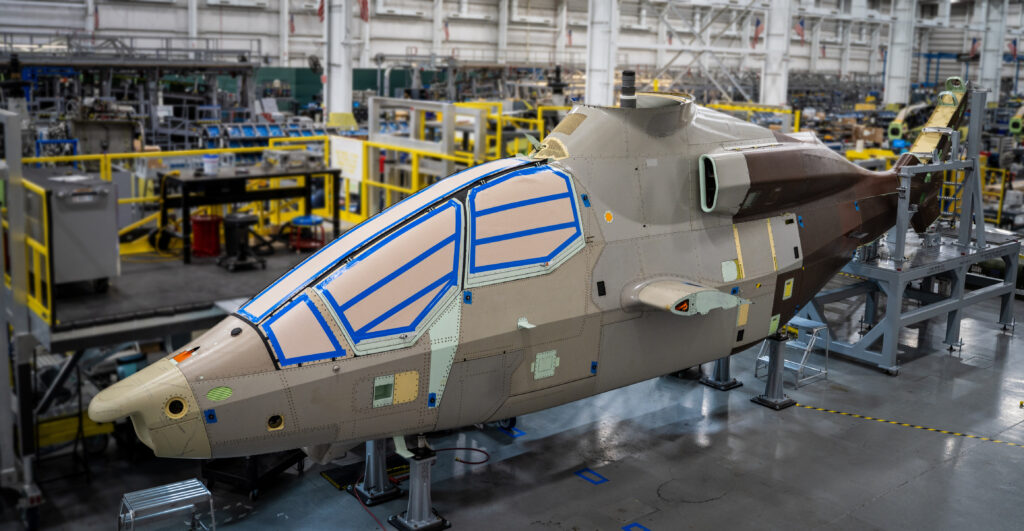 The Bell 360 Invictus sits at the company’s assembly center in Amarillo, Texas. (Courtesy of Bell)

AMARILLO and FORT WORTH, TEXAS: In the shadow of a major freeway interchange a few miles from downtown Fort Worth, Bell Textron is developing its factory of the future, experimenting with advanced manufacturing technologies that the company hopes to be able to significantly improve the assembly processes of the next generation of military assault and reconnaissance helicopters – if it wins these highly sought-after contracts.

The 140,000 square foot facility, dubbed the Manufacturing Technology Center, East already filled with the roar of machinery crushing helicopter parts and the incessant beeping of construction equipment preparing space for more equipment. The end goal is to reduce the time it takes to manufacture helicopter parts using a smaller run of digitally connected machines, from initial manufacturing to quality assurance.

“We really determine everything that will happen in your future plant,” said Keith Flail, executive vice president of advanced vertical lifting systems at Bell. “You lock down the process and lock down the recipe, lock down the machines you need. And then you can transfer that to the tariff to a future plant here.

It’s all part of the company’s plan to have its manufacturing processes top of mind if it wins the Army’s Long Range Assault Aircraft (FLRAA) contract this summer, in which it is in competition with a Sikorsky-Boeing team. Bell is also competing with Sikorsky for the Future Attack Reconnaissance Aircraft (FARA), the service’s future reconnaissance helicopter, which will not be awarded until next year.

Breaking Defense recently toured both the future Fort Worth factory and Bell’s current assembly center in Amarillo, where company officials said their facilities – old and new – will play a crucial role in building of the army’s future fleet if Bell won.

RELATED: The Distant Aim: Focusing FLRAA Where It Matters

At the MTC, journalists saw new machines molding critical parts such as rotors, gears and masts. If the company wins the FLRAA contract with its tilt-rotor design, the MTC wdo wronge the parts of the helicopter for the engineering and manufacturing design phase while experimenting with faster production processes. 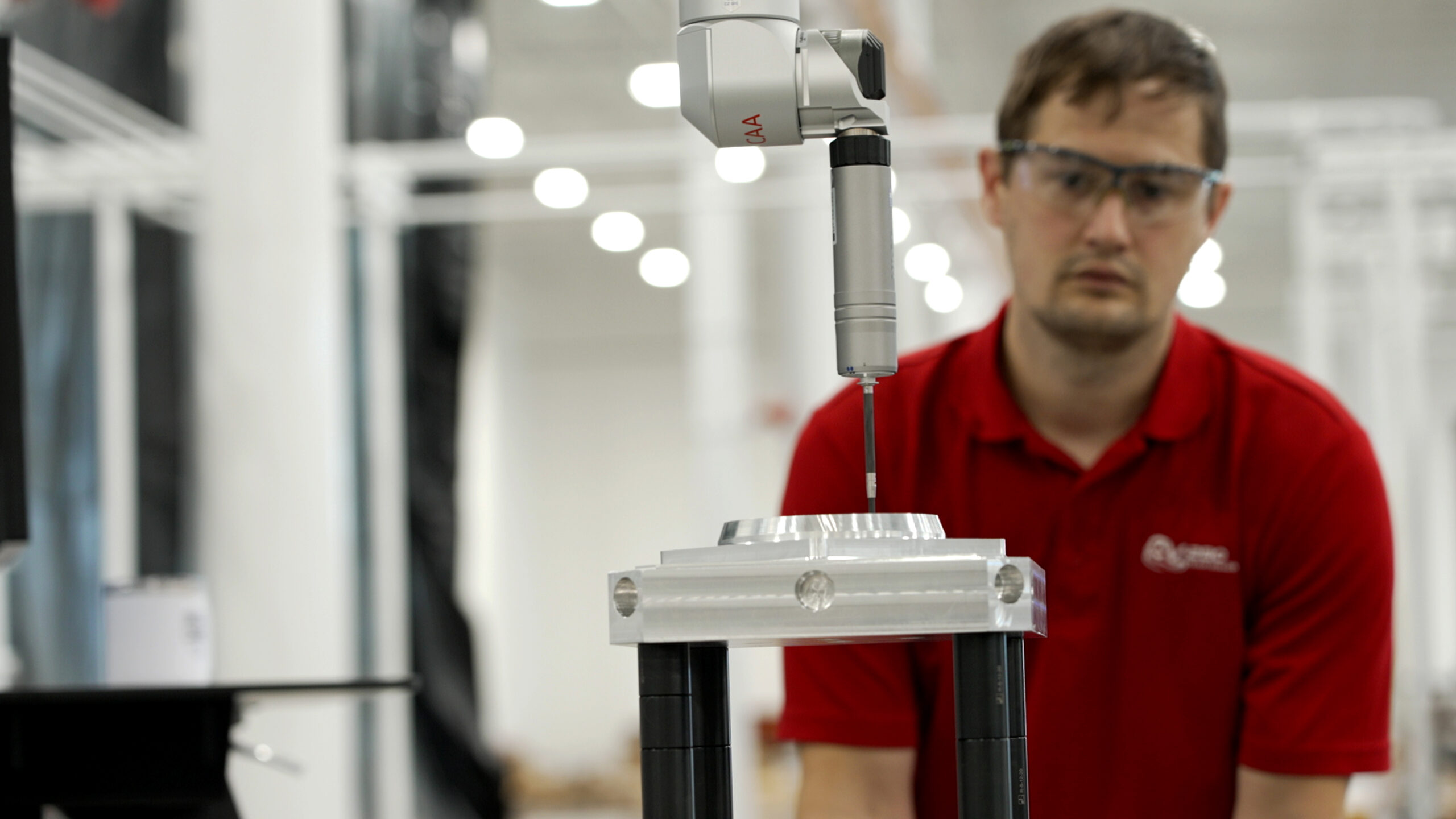 Accuracy validation at the Bell Manufacturing Technology Center in Fort Worth, Texas. (Courtesy of Bell)

“The point of this place is really to develop a recipe for parts of each specific process step, down to the details. [of] how do we work,” Glenn Isbell, vice president of rapid prototyping and manufacturing innovation, told reporters.

The facility includes automated quality assurance machines that measure the circumference of a circle or measure gear teeth up to 50 millionths of an inch – 50 times smaller than a human hair, a Bell engineer said. to journalists. If the assurance machine finds something wrong with the gear, it can automatically transmit this information to the gear grinder throughout the facility.

According to a company slide, the new strategies with which Bell is on-site experiments reduce the gear manufacturing process from 58 steps and 286 hours, not including travel time between sites, to 14 steps and 167 hours.

“The cycle time is orders of magnitude faster,” Isbell said.

Bell does not yet know how many more FLRAA and FARA aircraft its new processes will roll off the production line compared to his ongoing processs, except that should be a lot. East Bell says it largely depends on the variants and the final design.

“We’re going through all of these calculations now,” Isbell said. “But it is significant.”

So far, the company has invested $50 million in a research and development facility that seeks to significantly reduce production times. Bell has another $50 million investment planned, Flail said.

As its customers at the Pentagon work to connect sensors and shooters, dow at the cutting edge of technology the manufacturing machine transmits data about the helicopter parts as it works to mature and refine the manufacturing processes.

The facility also includes a massive 3D printer that builds tools, essentially molds, for helicopter parts. The 3D printer is 40 feet long, 10 feet wide, and can produce tools up to five feet tall. A Bell employee at the plant said the printer is currently being used to test the feasibility of printed tooling for both the EMD phase and initial low-rate production for FLRAA. 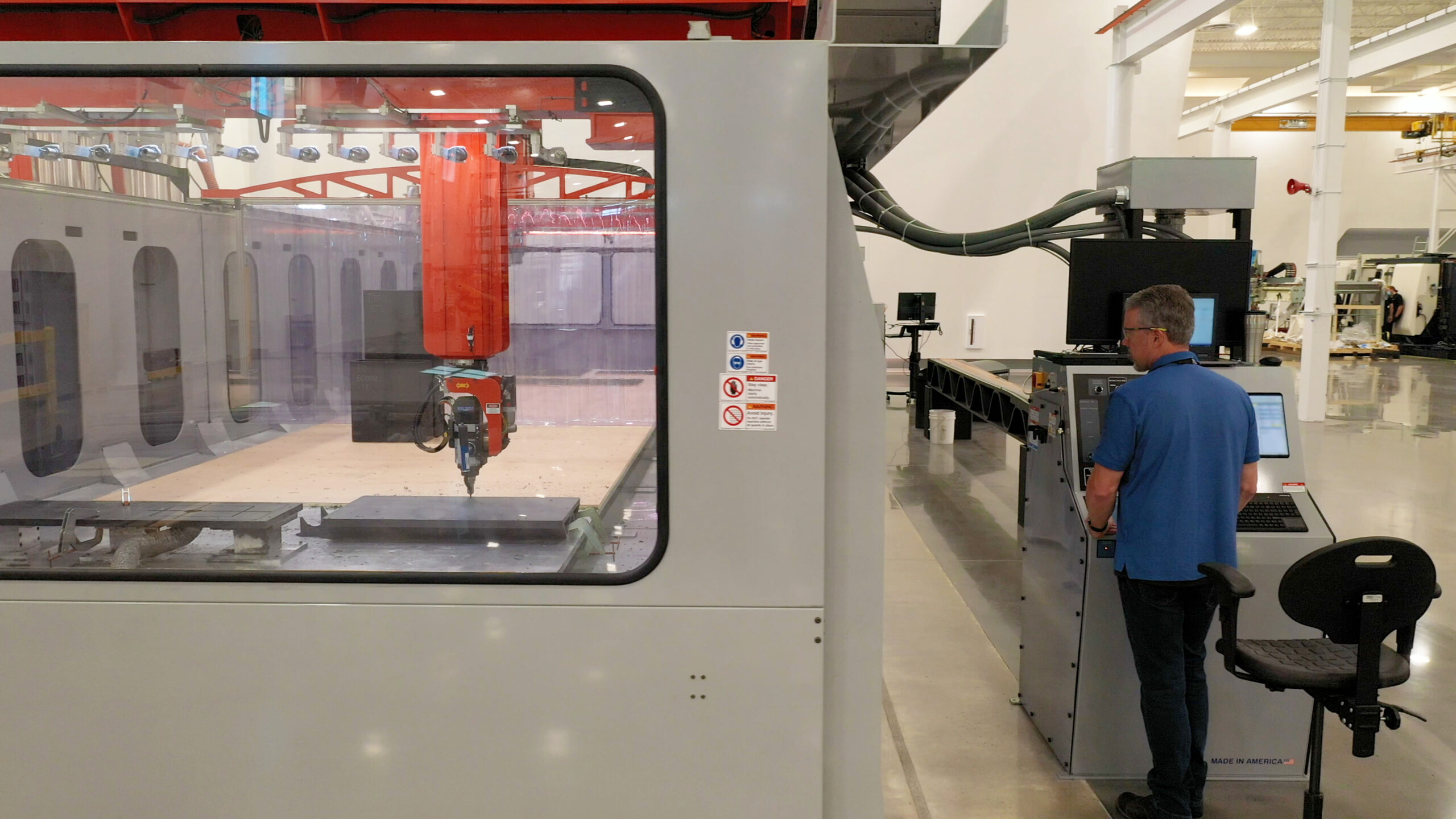 “It helps our designers to be able to just increase iterations the way we’re going to do it,” Isbell said.

Bell wants to get a head start on securing the contract(s) and have its processes locked in before it is asked to manufacture parts for the plane if the company is chosen. IIt’s important to be one step ahead, Bell officials told reporters, because manufacturing parts can take countless months and an accident can cause a delay of months.

Amarillo: the home of the FARA prototype

Over 300 miles northwest of Fort Worth, nestled in the chaos of a 1.5 million square foot assembly plant sits Bell Textron’s competitive prototype for the Army’s future attack reconnaissance aircraft, known as the 360 ​​Invictus.

The Invictus has just returned from three weeks in the establishment’s “red iron”, a medieval system of, literally, red iron test which is designed to stress the frame with representative flight loads.

Bell Textron’s Amarillo Assembly Center is the companyfinal assembly and verification installation for its current fleet of aircraft, as well as where the company plans to do much of the assembly for the FLRAA and FARA if the company wins those contracts as well — at which point the company announced it would expand the facility. (Bell provided travel for Breaking Defense, as well as other outlets, between the Fort Worth and Amarillo facilities.)

While Bell has a finished prototype for the previous FLRAA competition, the company’s FARA prototype is more than 80 percent complete, according to Chris Gehler, Bell vice president and FARA program director. The company expects the helicopter to be 90% complete by May, but will have to stop there pending development of the military’s upgraded turbine engine program, which will power FARA. 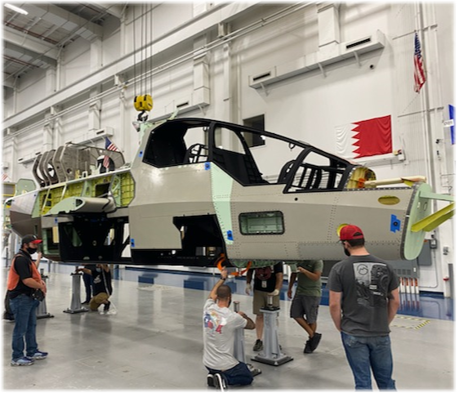 Bell 360 Invictus being assembled in Amarillo, Texas in July 2021.

The delay on the ITEP engine will in turndelay Bell flight tests for the helicopter nountil early 2023. The tests were originally planned for this year. However, while the company waits for the engine, which just started testing a few weeks ago, the company plans to do more testing and continue working on its design for Increment One, the first operational version of the helicopter that he would offer to the army.

One area where Bell believes it has an advantage over its competitor, Lockheed Martin Sikorsky, is weight. Bell claims its rotorcraft is lighter, but as it completes the prototype and plans its incremental version, it is looking to shed additional weight, particularly in its landing gear. The company claims that the more weight it loses, the more payload the army can carry.

However, “it won’t be significantly different,” Gehler said.

As FARA moves forward, Bell officials believe they are well positioned ahead of the downside selection for the engineering and manufacturing development phase next year.