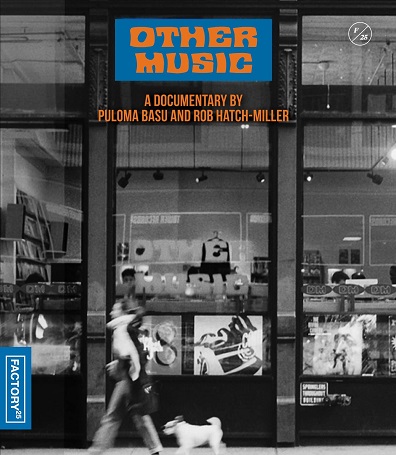 For 20 years, Other Music has sat just on the corner of 4th Street and Lafayette in New York’s East Village. As the neighborhood changed around it, their competition gradually disappeared and the music industry underwent a massive change, Other Music had a survivor quality. It felt like an institution, especially at a time when every other institution in the area felt like it had been replaced by a fashion store, fitness club, or chain of arcade-themed bars. In 2016, due to rising rents and the sudden dominance of streaming over people’s listening habits, Other Music shut down.

It had been empty since last year, with large banners in the window advertising the commercial appeal of the space.

During my peak record-buying years, Other Music was never where I did most of my shopping; their used records tended to be more upmarket than I could afford for most of my time in town. (Those were the days of skipping meals to pay for Mission of Burma tickets.) I’m incredibly guilty of window shopping, though: its central location to the Astor Place, 8th Street, and West 4th subways Street made it an incredibly convenient stopover no matter where you were going or coming from. Where other stores had room for boxes and boxes of cheap record bins to flip through, Other Music was infinitely more organized than any of their close competitors that offered new releases. When you walked through the doors, you knew you’d find things new, exclusive, or cutting-edge – or, if you could express your tastes to one of the incredibly knowledgeable clerks, they could usually find something specially suited to you. There was very little shitty music at Other Music. The small, cramped, one-room store didn’t have enough space to store trash.

Navigating Other Music has always been memorable. It was also an easy place to meet some of your local musical idols. Once I felt the shadow of a much taller figure loom over me to peer into the trash can I was rummaging through. When I realized it was Thurston Moore, I tried to show composure while quietly removing a used copy of EVOL from their display well, checked at the counter, then stood outside the store until he was done shopping, then awkwardly ambushed him to tell him I was a fan and ask him to sign my file. Even better were their in-store shows – if you got there early enough, you could be one of a few dozen fans to see an act perform practically in your face. These were often the same numbers played in venues like the Mercury Lounge or the Bowery Ballroom.

Puloma Basu and Rob Hatch-Miller Other Music (the documentary) is a lovely memorial for anyone who frequented the store or witnessed the city’s indie music boom in the 2000s. Filmed on the store’s final months of operation – putting the focus on his last days –Other Music tells the story not only of two of its founders, but also of the employees who have devoted much of their lives to shaping its ever-changing specialized inventory. Along with getting a chance to peek inside this much-missed little storefront, fellow former Other Music shoppers will likely be pleased to see the faces of the store’s longtime employees. – the experience was like seeing old friends that I hadn’t thought about in years.

Along with numerous interviews with two of the store’s founders and its employees/curators, Other Music meets many local music luminaries who give their thoughts on the store’s legacy and its place in the 2000s indie scene. We have Regina Spektor, Matt Berninger (The National), Tunde Adebimpe (TV on the Radio), Ezra Koenig (Vampire Weekend), Daniel Kessler (Interpol), members of Animal Collective (two of whom worked at the store, before fame), and many more. The doc obviously includes plenty of in-store musical performances, from St. Vincent (I was there!) and Neutral Milk Hotel, to Yo La Tengo, Antipop Consortium, and Gary Wilson covered in baby powder.

Factory 25’s Blu-ray release of the film contains even more musical performances on disc as deleted scenes. A large booklet brings together dozens of artists and employees sharing their best memories of OM, as well as a list of 100 albums to discover after watching the doc. (This serves as a very good sample of the genre of music their team tirelessly championed.) This is a limited release, so anyone who misses the store or has fond memories of the heyday of indie music from the city ​​will want to act quickly on this one.

For Alicia Silverstone, Mother's Day is all about shutting down factory farms