With a heritage spanning over 150 years, it’s no wonder the luxury brand Bernhard H. Mayer has become renowned for excellence in Swiss watchmaking. A mention of the brand conjures up images of skillfully crafted luxury watches that bear the hallmark of combining elegant design aesthetics with functionality.

The brand celebrated its centenary last year and witnessed the growth and evolution of the luxury industry from the late 19and century. As we mentioned earlier, Bernhard H. Mayer began as a company based on the engraving of precious metals in 1871, when its eponymous founder was only 28 years old. His talent combined with his excellent business acumen laid the foundation for what has now become a thriving luxury business that has spanned five generations of Mayers.

Bernhard H Mayer’s story began in 1871 in the idyllic Black Forest town of Pforzheim, southwestern Germany, famous for its jewelry and watch industries. since 18and century. The Mayers were a formidable name in the numismatic industry at the turn of the 20and century, counting European royalty and nobility among its clientele. During the first half of the 20and century, the Mayer family and their company had to face many challenges due to the two world wars, the Great Depression and the destruction of their factory during the bombing of Pforzheim in 1945, which left more than 80% of the city ​​in ruins.

Despite the turmoil, by the time the 1980s rolled around, the brand had successfully rebuilt and reinvented itself as a competitor in the watch world, expanding its offerings beyond numismatics into luxury timepieces. and specialized watch components. At the beginning of the 21st century, Bernhard H. Mayer moved his base to Switzerland, firmly establishing his position in the Swiss watch industry.

While Bernhard H. Mayer brand watches have gained popularity for its affordable luxury offerings, what many people don’t realize is that watches aren’t the brand’s only high-end products. As part of his natural evolution in the luxury industry, Bernhard H. Mayer entered the jewelry business in 2000.

The feminine touches found on its ladies’ watches have been translated into jewelry that exemplifies the highest form of wearable luxury. Created by master craftsmen and designers, each piece has a distinctive style and individuality to suit wearers’ personal tastes.

The Classics is described as a collection of delicate and timeless pieces that exude luxury. In keeping with the collection’s name, timeless elegance is evident in its items, such as the glorious gold Theia set, ethereal blue Doris set and sparkling diamond pendants. Elemental, on the other hand, offers exquisite pieces that embody modernity, creativity and quality; namely, yellow gold and brilliant diamond pendants crafted in simplistic and contemporary designs. Energy, described as a dynamic vision of the essence and power of wearable handcrafted pieces, includes a pair of Harmony bracelets, a His and Hers set, meant to balance a couple’s energy field.

Pearl Icons is a collection of minimalist designs that showcase the elegance and timelessness of pearls, a classic choice often spotted in high society. Akoya pearls (more on this below) feature prominently in each piece of jewelry, juxtaposed against the sparkle of yellow gold. Finally, the Timeless Tanzanite collection, the brand’s tribute to an exceptional African treasure. The shimmering blue-violet hue of the gemstone makes a dramatic statement when paired with yellow gold, creating truly unique jewelry pieces.

As sustainability is an integral part of Bernhard H. Mayer, the brand uses recycled gold obtained from suppliers who are members of the Responsible Jewelery Council (RJC). The nonprofit International Standards and Certification Organization ensures that all materials are environmentally friendly and ethically sourced, allowing customers to experience the same quality as new gold, but with the added benefit of protecting Mother Nature from the adverse effects of mining.

Below, we take a look at women’s watches and jewelry that are some of the centerpieces of Bernhard H. Mayer’s collections. From diamonds to pearls, each creation is a showcase of the know-how and attention to detail for which the brand is renowned.

A fairly new addition to Mayer’s watch offerings, the Lurve Diamond watch is one halve of twin masterpieces – the other being the equally minimalist and elegant Lurve watch – introduced to the brand’s Lurve collection which has was unveiled in December 2021.

As the name suggests, 12 full-cut diamonds (0.11 carats in total) adorn the watch’s 30mm Silver Sunray dial, serving as indexes while lending an extra touch of sophistication to its elegant face. An emblem of Swiss watchmaking and fine craftsmanship, the diamond-set creation powered by Swiss quartz – RONDA 762E exudes timeless beauty while inherently carrying a contemporary edge thanks to its 316L stainless steel case and bracelet. brushed/polished with rose gold PVD plating, the latter with a folding clasp of the same material.

With a bracelet with interesting textures and a round case, the soft curves of the watch inspire sensuality and strength. Its sleek yet enchanting dial is a prime example of elegant minimalism. The perfect marriage of classic and contemporary, it’s a watch made for the modern woman whose elegance is never compromised. 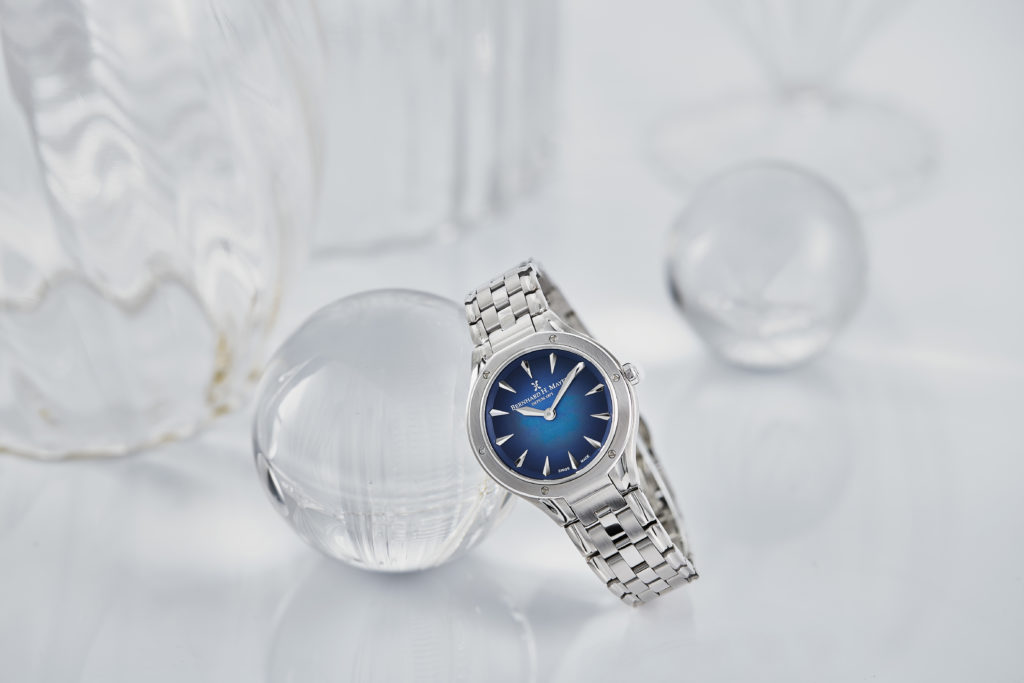 There is something about the polished look of stainless steel that lends an androgynous charm to its wearer, hence its widespread use and respected reputation in the world of watchmaking. When designed for women, stainless steel watches effortlessly generate feminine appeal through a careful fusion of various materials. Some of the most notable pieces from Bernhard H. Mayer’s collections that are the best example of this include Le Classique Ladies – Stainless Steel.

Its 35mm case is crafted from high-grade brushed/polished 316L stainless steel, the same material extending to the caseback and bracelet with folding clasp. The dial – an alluring blue mother-of-pearl – features a minimalist front punctuated with hour markers that make it easy to read the time while providing an enchanting visual contrast. Swiss Quartz – RONDA sits nestled within the watch, with the movement keeping the watch beating at a steady, steady pace.

Its simple design, with details kept to a minimum, the watch balances sophistication and simplicity; making it a perfect match for ambitious women looking for the perfect blend of elegance and practicality. “The pearl is the queen of gems and the gemstone of Queens,” said Oscar-winning actress Grace Kelly. As Hollywood royalty — and true royalty, becoming Princess of Monaco through her marriage to Prince Rainier — the actress would know a thing or two about being a queen.

The Diane necklace from Bernhard H. Mayer’s Pearl Icons collection will make any woman feel like one, without having to marry a king or prince first, with its simplistic yet refined design. Pearls have long been a favorite of royalty and nobility; it’s only fitting that the necklace places the center of attention on a single high-shine Akoya pearl, measuring 8.5-9mm, dazzling distinctly beneath a row of 0.09ct diamonds which further enhances the necklace’s regal presence. An 18k yellow gold chain completes this stunning piece, whose elegant silhouette allows it to blend seamlessly with formal wear or stand out against more ornate evening wear.

Bernhard H. Mayer introduced the necklace just in time for the holiday season last December, introducing it to his Pearl Icons collection which includes jewelry adorned with Akoya pearls. Cultured saltwater pearls come from Akoya oysters (Pinctada fucata martensii) which typically only produce two pearls per harvest. This not only makes these pure white pearls rarer but also more valuable compared to their freshwater counterparts. The pearls are carefully selected by the brand’s jewelry experts, integrating them into timeless creations that carry a fashionable flair with a hint of modernism. 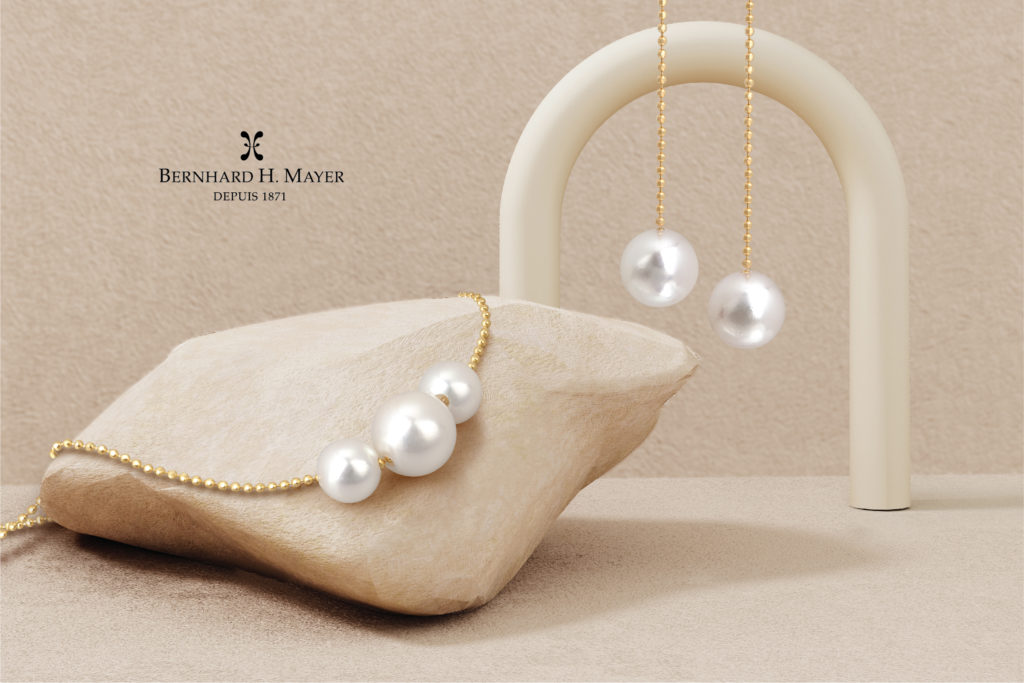 The “pearl” of Selena’s pearl set, of course, relates to the precious pearl that takes center stage in her necklace and earrings. This set was introduced alongside the aforementioned Diane necklace, but featuring a total of five pearls instead of just one.

The first three shimmering Akoya pearls are found in the necklace, each measuring 6-8.5mm and strung on a 45cm 18k yellow gold sliding chain. An interesting point to note is that the beads are detachable, allowing the necklace to be accessorized with one, two or all three beads. The set is completed by a pair of 18k yellow gold earrings, from each of which hangs a single Akoya pearl measuring 7.5 to 8 mm. Worn as a whole, the set exudes a sophisticated and seductive energy that suits a contemporary woman ready to live life to the fullest.

“Life is made up of a few moments chained together like pearls. Each moment is a pearl, and it’s up to us to choose which shines brightest,” author Joyce Hilfer wisely said. The Selena Pearl set encapsulates the exact sentiment, serving as a reminder of the moments in life that inspire and define its wearer.

(All the pictures : Bernhard H. Mayer)