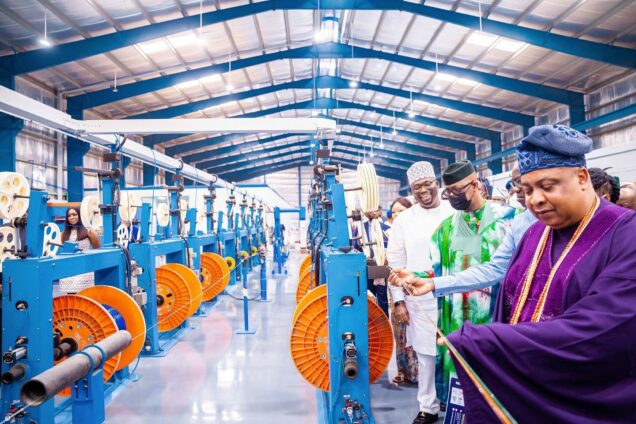 The company, the fifth largest optical cable manufacturer in Africa, was located in the Arepo region of Ogun State.

Speaking at the plant’s inauguration, Abiodun said it will further boost his administration’s innovation and the development of its digital economy infrastructure.

He said he was delighted that the pioneering plant is also boosting the advancement of teaching and learning processes in academic institutions in the state.

“The local manufacture of fiber optic cables will facilitate the deployment of information and communication technologies (ICT) in different sectors of the economy.

“It will drive technological innovation, advancement of teaching and learning processes in our academic institutions, improve medical care, improve ease and access to data information, and improve internet connectivity.

“This will undoubtedly spur our administration’s innovation in digital economy infrastructure,” the governor said.

Abiodun said his administration’s commitment to building a technologically advanced state won him awards in ICT and digital economy by the Federal Ministry of Communication, Business Day Newspaper in 2019, Daily Independent Newspaper and Daily Times in 2021.

He said the awards were in recognition of his administration’s efforts to maximize the benefits of ICT and the digital economy.

The governor further said that the launch of his digital economy project which aimed to lay 5,000 kilometers of fiber optic cables across the state would receive a much needed boost with the inauguration of the first cable factory in fiber optics in West Africa.

He called on other well-meaning individuals and organizations to take advantage of the immense opportunity presented to the state.

Abiodun, urged private industries in the state to be aware of their responsibility to corporate social values, charging host communities to show a high level of cooperation and responsibility.

“In this regard, the industries should supplement the existing infrastructure that has been provided by the state government through prompt payment of their taxes,” he said.

Minister of Industry, Trade and Investment, Mr. Niyi Adebayo commended the company for its achievements, saying the factory is well placed to actively participate in the African Continental Free Trade Area ( AfCFTA).

Adebayo, who was represented by FMITI’s Director of Industrial Development, Mr. Adewale Bakare, said the company’s expansion into fiber optic cable production was a confirmation of confidence in the industrialization drive of the federal government.

He said Nigeria’s journey towards industrialization was on track as evidenced by the company’s drive to increase local production capacity, which he noted was also in line with the program of upstream integration of the ministry.

“It is a comprehensive and strategic approach to industrialization to promote value addition throughout the manufacturing process chain in line with the Nigerian Industrial Revolution Plan,” the minister said.

In her remarks, the United States Ambassador to Nigeria, Mary Beth Leonard, represented by Commercial Attaché, David Russell, noted that the impact of the plant would be seen everywhere, as would more jobs would be created for the residents of the state. .

Earlier in his remarks, Managing Director and Chief Executive Officer of Coleman Technical Industries Ltd, Mr. George Onafowokan said that the company, since its inception, has been a firm believer in local content.

He said the company’s vision is based on the principle of believing in Nigeria and developing local capacity.

Onafowokan said the company would build capacity in the country, West Africa, Central Africa and around 50% of the continent.

He said the plan was to make the company the largest fiber optic cable factory on the continent by September 2023.

The Managing Director of the Bank of Industry (BOI), Mr. Olukayode Pitan, said that the project has the potential to contribute not only to the information and communication technology (ICT) sector, but also to the engineering, oil and gas.

“Before the intervention of the BOI, the installed capacity of the company was around 12,000 metric tons per year, which provided around 500 jobs.

“With this expansion, production capacity will increase to approximately 162,000 metric tons per year capable of providing 2,800 direct and indirect jobs.

“This project is also in line with the federal government’s policy of import substitution and economic diversification, which results in foreign exchange savings,” he said.

Pitan further said that the plant is in line with the federal government’s 2020-2025 National Broadband Plan, which aims to achieve 70% broadband penetration and 90% reach by 2025.

“According to the World Bank, a 10% increase in broadband penetration in any country can improve gross domestic product (GDP) by at least 4.6%.

“For Nigeria, this is necessary to improve economic activities as we harness the potential of the growing digital economy for economic diversification.

“We are proud of our involvement in this project and will continue to support the company’s future ventures,” he said.

Candler said that people have become more involved in the Internet for several purposes such as entertainment, communication, distance learning, e-commerce and streaming high-quality video content, among others.

“In order to manage, process, share and store all this data, users are increasingly using the cloud to keep pace with change.

“All of these developments depend on the presence of a resilient, high-capacity communications network that requires many fiber optic cables.

“So the opening of this plant could not have come at a better time and Corning Inc. is delighted to have been selected as the fiber optic supplier,” he said (NAN).
==========

Realization of centralized control of the plastics factory