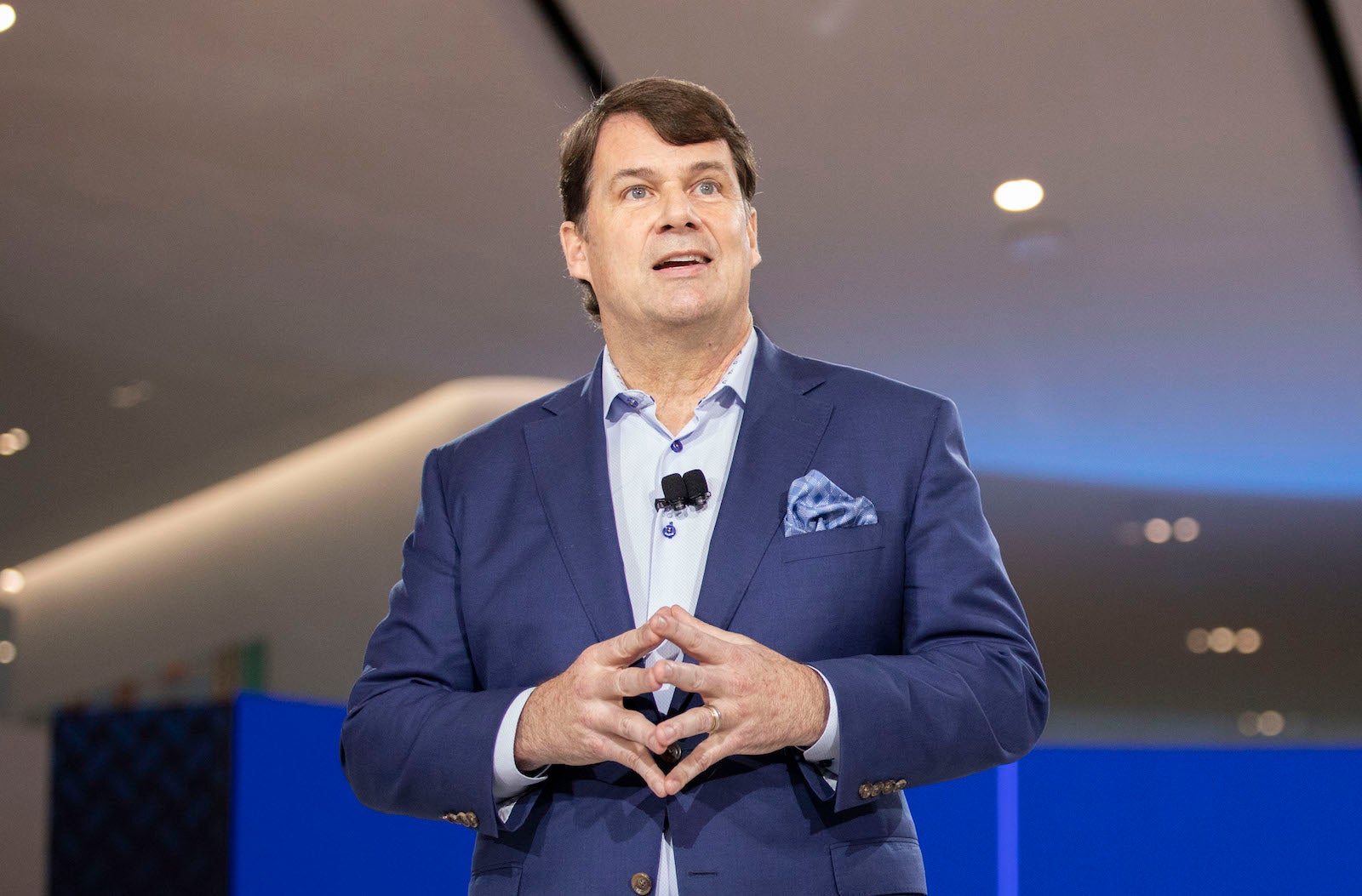 Ford Motor Co. announced a sweeping restructuring plan on Wednesday that will see it split its conventional gasoline and diesel vehicle businesses from a new unit focused on electric vehicles and digital technologies such as connected cars and digital marketing.

But the move announced by CEO Jim Farley falls short of recent reports that Detroit’s second-largest automaker is exiting its electric vehicle business entirely. Farley said the new approach will adapt to changing industry realities, but also allow both operations to leverage each other’s strengths. And in the process, he predicted, Ford will be able to “beat new players” in the auto industry, like Tesla.

“Our legacy organization was holding us back,” Farley said in a webcast meeting from Ford headquarters in Dearborn, Michigan. “We had to change,” he added, calling the move “one of the biggest changes in our history” at Ford.

The payoff, Farley said, will be significant. He predicts a surge in sales, especially of electric vehicles, while Ford as a whole will see its adjusted EBIT margins rise from 7.3% in 2021 to around 10% by 2026.

The two organizations will be among five new semi-independent operating units within the company, a group that includes Ford Finance, the automaker’s captive lending business, technology unit Ford Drive and Ford Pro, recently created, which focuses on fleets and commercial products.

Ford Model e will handle the development of electric vehicles while Ford Blue will take over the development, production and marketing of conventional models using internal combustion engines, such as the “iconic” F-series pickup, Ford’s best-selling and most profitable model.

Even as some competitors — notably Crosstown rival General Motors — consider phasing out sales of vehicles using ICE powertrains, Farley said he foresees a long life for the technology.

“ICE volumes will deteriorate over time,” Farley acknowledged, but he stressed his belief that there will remain “certain segments” where gasoline and diesel will continue to find a market, especially with products like the heavy versions of the F-Series.

Still, it’s clear from what he and other Ford executives said Wednesday that Ford sees the real growth coming from its new Model e division.

The automaker was an early proponent of electrified vehicles, but gained relatively little traction with quirky short-range entries such as the Ford Focus EV. More recently, however, it scored big with its first long-range model, the Mustang Mach-E. And demand for the F-150 Lightning battery-electric pickup has so far exceeded initial expectations that Ford will roughly quadruple production capacity at a new electric vehicle plant near its headquarters.

He sets up a massive new factory complex near Memphis, Tennessee, to produce the Lightning and other BEVs. Dubbed Blue Oval City, it is expected to open mid-decade. By then, Ford now expects to sell 2 million electric vehicles a year, Farley predicted during Wednesday’s presentation.

By splitting EV and ICE operations, Ford believes it can change internal structures and create new corporate cultures more suited to the specific type of vehicles each unit produces.

In the case of the Model e, that will mean a lean company aimed at duplicating the speed and flexibility of a Silicon Valley company, said Doug Field, the former Tesla executive who recently joined Ford and will serve as director of electrical and digital systems for the model. e.

In addition to electric vehicles, Ford Model e will oversee connected cars and other digital technologies that will become increasingly important in tomorrow’s automotive industry. While Field and Farley declined to provide specific numbers, officials from General Motors and Stellantis estimated that their companies will each generate more than $20 billion in revenue in the coming years from the sale of software and hardware. services, in addition to vehicle revenue.

The focus on technology, Field said, will help Ford attract a new generation of tech-focused talent. That hunt will be aided by revised compensation and benefit plans, officials noted, as well as a more flexible approach to where they can live.

Field said he wanted to “focus on creating great talent. I don’t care if they come to work in bunny slippers.

While the Model e could position itself as the trendiest and most nimble operation, it won’t be business as usual at Ford Blue, insisted Kumar Golhatra, who will take over as chairman of that unit.

One of his first challenges will be to reduce Blue’s structural costs by $3 billion. It will have to become lighter, more efficient and much faster.

Each of the two vehicle operations have specific areas to focus on. The e model will emphasize digital technologies and be responsible for purchasing things like batteries and motors. Blue will take care of the purchase of more conventional supplies, such as steel. Obviously, they will then cross-pollinate. And there will be obvious synergies.

In the near term, battery electric vehicles are expected to cost an average of $4,000 more than comparable gas-powered models, according to research by Argonne National Labs. And building a viable EV operation will require “a huge commitment of capital,” Farley said, noting that Ford will invest $5 billion in EVs and high-tech operations this year alone. Currently, continued production of ICE vehicles like the F-series will offset this burden.

“Ford Blue and Model e will drive each other’s success,” Farley said, adding “That’s why we didn’t separate them.”

During the hour-long presentation and Q&A session, Farley echoed comments from fellow CEOs at General Motors and Stellantis over the past week.

While Wall Street may place high value on fledgling companies like Tesla and Rivian, Ford’s CEO said these new entries will face serious challenges moving forward as they transition from niche players to traditional actors.

On Tuesday, Stellantis CEO Carlos Tavares pointed to persistent quality issues at startups, especially Tesla, a problem that analysts say will be a growing problem as it tries to broaden its appeal.

But Ford could face its own challenges by implementing the new organizational structure described by Farley and his top lieutenants. During the Q&A session, the CEO was reminded of the problems other automakers have faced when implementing major reorganizations.

Among the most notable was the disastrous reshuffle of General Motors in the mid-1980s, which saw it split automotive operations into mainstream and premium brands. According to former Wall Street analyst Maryann Keller, GM was virtually paralyzed for two years trying to make the new business work.

Farley said he is well aware of the challenges ahead and promised measures are in place to get things done.

The CEO made it clear that Ford isn’t just looking to the past or simply studying traditional rival brands like GM. He takes a close look at new companies like Tesla to understand how to improve his customer experience. Ford also plans to work with dealerships to disrupt its century-old retail model. But it has no plans to abandon the franchise dealer system, he stressed.

Dealers, he said, “are excited” about what’s to come, but he also mentioned, somewhat cryptically, that “they’ll have to specialize” in the future.

What has become increasingly clear in recent weeks, as more mainstream automakers announce new plans, is that there will be no room for business as usual in the ‘automobile industry. And that, Farley said, opens up opportunities, as much as it increases risk.