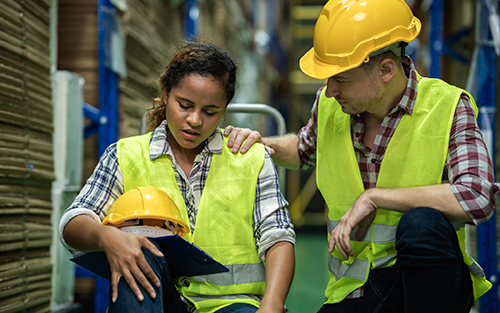 
The manufacturing industry saw the second-largest increase in quit rates in 2021, according to the U.S. Bureau of Labor Statistics, second only to the recreation and hospitality industries. A major cause of these resignations? Stress at work. Here, Claudia Jarrett, US country manager at EU Automation, the global supplier of quality automation componentsexamines how the latest digital technologies can help reduce stress in industrial workplaces.


The US Bureau of Labor Statistics’ the results can best be understood in the context of the Great Resignation. Otherwise known as the Big Quit, the Great Quit is an ongoing economic trend where, since 2021, employees have voluntarily resigned from their jobs. en masse. There are various possible causes for this, including stagnating wages, rising cost of living, security issues, and growing job dissatisfaction.


These issues go beyond mental health. According to a report by the American Psychological Association, Stress in America: paying with our healthjob stress is costing the US economy more 500 billion US dollars every year. The same report states that 550 million working days are lost every day due to work stress.


High employee turnover is undesirable for manufacturers, whose credibility and competitiveness rely on seasoned expertise, established processes and long-standing relationships. So what has changed and how can manufacturers fix these issues? The answers may lie in digitalization and Industry 4.0.

Efficiency is the name of the game for manufacturers. 98 percent of companies surveyed in PwC’s Digital Factories 2020: Shaping the Future of Manufacturing report indicates that increasing production efficiency is one of the main reasons for the expansion of digital factories. 74% cited the ability to react more quickly and flexibly to customer wishes. But what impact do faster-paced production environments have on the minds and bodies of workers? With the large production quotas, employees can often feel overwhelmed, which can lead to undue stress and, in some cases, burnout.


Burnout is a state of emotional and physical exhaustion caused by constant exposure to unrelenting stress for an extended period of time. But what causes burnout in manufacturing environments? A study of The International Journal of Health Services blames “work demands and stress reactions in the uneventful, repetitive monotony at work” and suggests that in such cases workplace reforms are needed.


One way to free humans from repetitive and monotonous tasks is through robots and the increased use of 2D and 3D vision systems. While “blind” robots, those without a vision system, can perform simple repetitive tasks, robots with artificial vision can react better to their environment. 3D systems, in particular, can overcome some of the errors encountered by 2D-equipped robots when performing physical tasks. In the future, robots equipped with 3D vision systems have the potential to read barcodes and scanners, check for defects, package items, check component orientation, and more.


Another stress reducer is that manufacturers are increasingly realizing the benefits of easy-to-use robots. Because they require less skill-intensive control through intuitive human-machine interfaces (HMIs), human workers can instead focus their attention on more important goals, like achieving key performance indicators (KPIs).

Bots and automation can also help solve another major factor behind the big quit. As Bloomberg reports, the Big Quit is largely about the lack of opportunities for low-income workers to move up the career ladder. Automation can solve this problem in two main ways.


First, although automation tends to reduce the number of employees needed in an industrial environment, it can also increase the skill levels required to free up workers to focus on more useful jobs. However, to realize this potential, manufacturers must train and develop their staff to make the most of the latest SCADA and enterprise resource planning (ERP) systems.


Second, while automation requires higher skill levels from some workers, it can, conversely, lower the skill levels required from others. In other words, rather than replacing humans, an automated future can create opportunities for employees of different skill levels.

Another common workplace stress in manufacturing is an unsafe work environment. Take the example of oil and gas, where CNN reporting that 44% of young adults aged 20 to 35 find a career in the sector unattractive because they find it dangerous. Security concerns could also be a key factor behind the Big Quit. To address this issue, McKinsey & Company warns that “health and safety concerns continue to evolve, in part because employee needs and expectations have changed. For example, employees with young, unvaccinated children may not feel safe at large in-person gatherings.


Fortunately, automation hardware and software have been shown to improve worker safety by keeping them out of harm’s way. This has been the case since traditional six-axis robots were first deployed on production lines in the 1960s to remove the presence of workers from certain aspects of the production line.


Robots can combine with artificial intelligence (AI) and machine learning (ML), allowing software algorithms to learn and develop while the equipment is in operation. As stated in PwC Digital Factories 2020 report, “Robots and other digital technologies will also make workers’ lives in the factory easier, safer and more efficient.”


Implementing technologies to reduce the strain on employees is not only beneficial for the workers, but also for the company. A better and more engaging work environment can increase productivity. According to a recent study by Manufacturingthe productivity of engaged employees is 70% higher than that of self-employed workers. This study also found that engaged employees had better safety records, lower turnover rates, and higher profitability.


The range of stressors behind the Big Quit can seem complex and varied. Nevertheless, digital technologies such as robots can play a key role in making workers’ lives in the factory easier, safer and more efficient, while minimizing the impact of the most common stressors in manufacturing and while maximizing productivity.


To stay up to date on the latest developments in manufacturing, visit EU Automation Knowledge Center.

Claudia Jarrett is the US Country Manager at EU automation.


Did you enjoy this great article?

Check out our free e-newsletters to read other interesting articles.