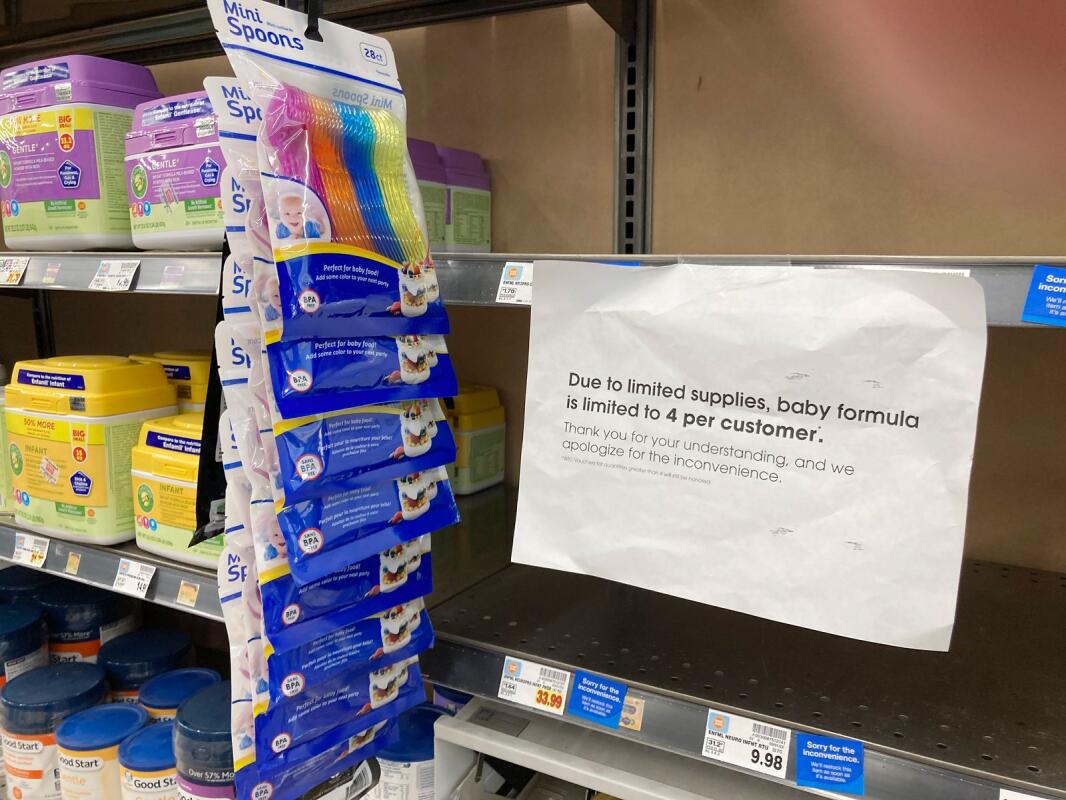 A sign advising consumers of formula purchase limits hangs May 11 on the edge of an empty shelf for the product at a King Soopers grocery store in southeast Denver. Across the country, parents are struggling to find in-stock formula in stores due to supply chain disruptions combined with a massive safety recall. (AP Photo/David Zalubowski)

Federal inspectors spotted the possibility that infant formula made at an Abbott Laboratories plant was contaminated months before a recall that exacerbated a nationwide shortage, according to a government document.

The Food and Drug Administration report adds a new twist to the growing gap between infant formula supply and demand since Abbott recalled Similac and other top-selling brands in February, alarming parents – including those in Iowa — and stoking anxieties among lawmakers.

Federal officials investigated the cases of four babies who fell ill – two of whom died – from cronobacter after ingesting formula made at Abbott’s plant in Sturgis, Michigan.

US officials are increasingly focusing on the crisis. The White House has tried to reassure parents that supplies will be replenished, and President Joe Biden met with manufacturers and retailers on Thursday to discuss ways to increase supplies.

Abbott said this week that it could restart production in the coming weeks and have the formula back on shelves within two months, pending FDA clearance.

The FDA report obtained by Bloomberg News through a freedom of information request shows that during a routine visit to Abbott’s Sturgis manufacturing plant in September, inspectors determined that employees may have transferred contaminants, including deadly cronobacter, from surfaces to infant formula. In one case, according to the report, records showed Abbott detected cronobacter in a finished batch of formula that could have been contaminated by a worker who touched a contaminated surface without changing gloves. This lot has not been distributed.

Abbott said his formula was not to blame for making infants sick. “There is no evidence to link our formulas to these childhood illnesses,” the company said in a statement to Bloomberg, without commenting on the detailed inspection report. Abbott previously said it found cronobacter in a formula it didn’t distribute in 2019 and 2020, and the FDA said its inspectors found the pathogen again in the plant this year.

The company distinguished between contaminants found on equipment involved in production and microbes detected in the wider factory environment. Abbott said tests did not find cronobacter on anything that comes in direct contact with the substance in the formula. But the 39-page FDA document reviewed by Bloomberg shows that inspectors observed how the products could still be contaminated.

In the detailed report of their September visit, two FDA inspectors said they observed an Abbott processing operator touching “non-food contact surfaces” – essentially anywhere in the facility that doesn’t. does not come into contact with the formula. Without changing his gloves or sanitizing his hands, the same worker touched the inside of a bag of ingredients that was being weighed.

Such practices can pose “a danger to food safety”, the inspectors wrote in September. As an example of how this could lead to contamination, inspectors highlighted a case in June 2020 when a batch of Similac For Spit-Up formula – which was not distributed – tested positive. for cronobacter.

Abbott had listed poor manufacturing practices as a likely cause of this contamination event, including a worker touching a hoist and then opening something, “without a gloved, sanitized hand.” Details of what the worker opened are redacted in the report.

The document also details five cases of positive tests for cronobacter in non-food environmental samples from the plant from January 2019 to August 2021.

Minnesota health officials first spoke to the FDA in September about an infant who ingested Abbott formula and became ill with cronobacter. After three more reports of sick babies in the following months, the FDA sent inspectors back to the Michigan plant in January. During this inspection, Abbott recalled three formula brands manufactured there: Similac, Alimentum and EleCare. Based on the findings of agency inspectors over several weeks earlier this year, production at the plant was halted, exacerbating shortages that had arisen earlier due to supply chain issues.

Abbott said it is working to address food safety violations found by the FDA during the inspection earlier this year and to modernize the plant, “including the installation of non-porous, easily cleanable floors and sanitation”.

Tests conducted by government officials on unopened formula containers at the homes of the four sick babies were all negative for cronobacter, Abbott said, and one of the homes’ three opened containers tested positive. The positive contained two different strains of cronobacter: one that matched the strain that caused the infant’s infection and another that matched the germs found on a bottle of distilled water used to mix the formula, Abbott said.

Government officials also conducted genetic testing and found that the cronobacter strains found at the Abbott plant do not match those taken from the samples from two infants. The lack of matching strains from samples of sick infants adds to evidence from testing its machines that the plant was not likely to be involved in the outbreak, the company said.

Inspection earlier this year revealed five different strains of Cronobacter at the Michigan plant. This could indicate sporadic contamination that may be caused by poor manufacturing practices, said Craig Hedberg, co-director of the Minnesota Integrated Food Safety Center of Excellence.

“If that’s the case,” said Francisco Diez-Gonzalez, director of the Center for Food Safety at the University of Georgia, “it may explain why the strains they found when they went to the plant may not be the same as those that were there when the product was contaminated.”

Republican Utah Sen. Mitt Romney wrote to FDA Commissioner Robert Califf on Tuesday expressing concern about the shortages and the agency’s handling of the recall. Based on a summary of the September inspection, which the FDA released in March, Romney said he was alarmed and asked if more was known that was not included in the preview. The summary does not reference cronobacter and contains significantly less information than the report reviewed by Bloomberg.

The summary “suggests that the FDA’s routine inspection authority is insufficient to meet consumer safety demands, but its hammer of near-closing facilities is causing a ripple effect across the country,” said writes Romney.

What's inside a smart factory? – Magoda – Made in America