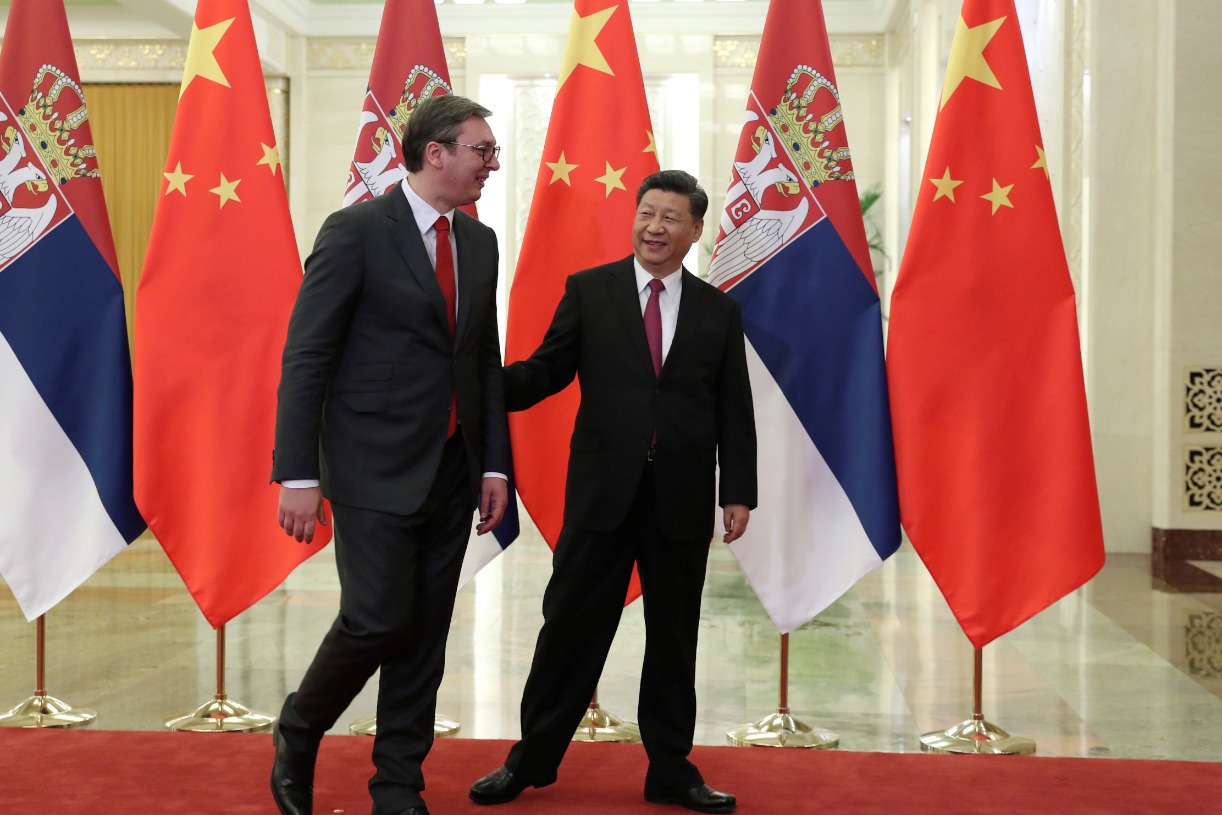 CHINA has become Serbia’s main partner outside the Western world, and the political ties between the two governments are intense. As US-China relations become divisive and China’s relationship with the EU is rocked, it will become increasingly difficult and risky for Belgrade to continue trying to navigate between the two and maintain its ties with Beijing. .

LIKE MUCH of Serbia’s foreign policy, Belgrade’s partnership with Beijing was shaped by two events in 2008: Kosovo’s unilateral declaration of independence and the global financial crisis. When Kosovo declared independence from Serbia, counter-secession became the dominant strain of Serbian foreign policy. For Belgrade, the fact that China, a rising world power, the most populous country in the world and a permanent member of the UN Security Council, has do not recognizing Kosovo’s independence was a welcome development.

There was also a broader systemic logic at play. The global financial crisis of 2008 diverted EU and US attention away from the Balkan region, creating a power vacuum filled by non-Western actors, including China. However, the global financial crisis has also prompted Belgrade to actively engage with Beijing. Serbian policy makers have been impressed with the perseverance of the Chinese economy despite the shock of the crisis. Serbia viewed China as a potential source of financial assistance for its hard-hit economy, as well as a potential geopolitical partner at a time when Serbia was diversifying its relations in an uncertain world. Moreover, the idea that the world is moving towards multipolarity, thanks in particular to the rise of China and the idea that Serbia must keep its options open, is shared by the entire Serbian political class, regardless of partisan and ideological distinctions. Incumbent Serbian President Aleksandar Vučić – who, unlike centre-left former President Boris Tadić, is leading Serbia in an illiberal direction –share this same understanding.

Belgrade has since acted on these perceptions. In 2009, Serbia and China issued a joint statement on a strategic partnership and signed an agreement on economic and technological cooperation in infrastructure development. As a result, China agreed to provide a line of credit for the construction of a Danube bridge connecting two Belgrade municipalities (Zemun and Borča), thus launching the first major Chinese project in Serbia. China’s state-owned China Road and Bridge Corporation (CRBC) was in charge of the project, while the Export-Import Bank of China, or Exim Bank, provided the funding. With this agreement, the political foundations for a future partnership have been laid.

WHILE SERBIA was excited about its new strategic partnership with China, it was not reciprocated from Beijing, at least not at first. President Tadić celebrates called china “the fourth pillar of Serbian foreign policy” alongside the EU, the United States and Russia. To avoid jeopardizing its partnership with Beijing, Belgrade tried to boycott the 2010 Nobel Peace Prize ceremony – honoring late Chinese human rights activist Liu Xiaobo – only to abandon this boycott under pressure from the EU.

However, Beijing has not shown the same level of interest. China did not want to be involved in provincial disputes in the Balkans, such as the Kosovo issue, because none of these disputes directly affect China’s own national interests. When Serbia requested an advisory opinion from the International Court of Justice on the legality of Kosovo’s declaration of independence in 2010, China supported the Serbian initiative but did not delegate his judge in this instance. At the end of 2012, most Serbian diplomats perceived China as a country with which Serbia had friendly bilateral relations, but not a major player in the geopolitics of the region.

The situation began to change in 2012. In that year, China inaugurated the “16+1 initiativea platform aimed at facilitating cooperation between China and Central and Eastern European countries, including Serbia. Then, in 2013, Chinese President Xi Jinping announced the Belt and Road Initiative (BRI) – a macro project dedicated to building a global infrastructure connectivity network, primarily aimed at bind China economically and politically with the extent of Eurasia. Through the BRI, China would also promote itself internationally, enhancing its political influence and soft power capital, even in faraway countries like Serbia. As a result, the Balkans, and Serbia in particular, being the geographically central country in the region, found themselves on China’s radar, as Beijing perceived the region as a bridgehead between Europe and the rest of Eurasia. . Moreover, Serbia is a candidate for EU membership, which has further increased Chinese interest. Serbia, from China’s perspective, could become the conduit through which EU markets could be penetrated.

In 2014, Chinese Premier Li Keqiang visited Belgrade to attend the 16+1 Summit. He also witnessed the opening of the aforementioned bridge over the Danube, the Pupin Bridge, named after the Serbian scientist Mihajlo Pupin. In addition, during the summit, Premier Li promised Central and Eastern Europe that China would create a focused, region-focused investment fund capitalized with $3 billion and $10 billion in lines of credit.

However, it was in 2016 that the partnership really started to take offwith Xi’s visit to Serbia.

At first, Chinese interactions with Serbia revolved mainly around economic policy and Chinese infrastructure loans made under the aegis of the BIS. But as EU enlargement efforts stalled, its funds became inaccessible to Serbia, making Chinese funding even more attractive. This has allowed China to acquire significant interests in key sectors of the Serbian economy, allowing Beijing to use the country as a springboard to access EU markets.

Take the case of steel. In April 2016, a Chinese conglomerate called Hesteel Group acquired a major local steelmaker in Smederevo, renamed HBIS Serbia after the acquisition, indicating that it would invest $300 million over the next few years to upgrade existing factories in business and increase production. Ironically, HBIS was originally owned by US Steel, which invested the capital and resources that made the steel mill one of Serbia’s largest exporters from 2003 to 2012. Taking advantage of falling steel prices steel at the time, China acquired the steel mill, and by the end of 2018 the company was once again Serbia’s largest crude exporter. (However, the company is currently struggling due to the introduction of steel import quotas in the EU.)

Other notable examples of Chinese funding abound. In 2018, Zijin Mining took control of Serbia’s indebted Zijin Bor Copper (better known as RTB Bor), the only copper mining complex in Serbia. With RTB Bor and HBIS’s Smederevo steel plant, China has captured two of Serbia’s major industrial infrastructure assets. In September of the same year, at a World Economic Forum event in Beijing, Vučić and Xi agreed on a plan to welcome a Chinese company, Shandong Linglong, to Serbia with a project to build a a tire factory in Zrenjanin – an investment estimated at $1 billion.

China has also been active in Serbia’s energy sector. The modernization of the Kostolac coal-fired power station was completed by China Machinery Engineering Corporation, with China’s Exim Bank providing the financing.

Then there is the infrastructure. The CRBC is currently involved in the construction of the E-763 highway, which will increase connectivity between Belgrade and western Serbia, while allowing faster travel from Serbia to Montenegro. Meanwhile, the construction of the Belgrade-Budapest railway remains the most famous Chinese project in Serbia and is often touted as a BRI flagship project. Although the ultimate fate of this project remains unknown due to numerous delays on the Hungarian side, thus highlighting some of the failures of the BRI, engaging in this type of projects allows Chinese state-owned companies to gain references to participate. to EU-based tenders. .

Given the huge quantitative and qualitative disparity between the two economies, a question mark remains as to the real functionality of this economic partnership. Serbian exports to China in mid-2021 have increased fifteenfold over the past five years, reaching $377 million. However, China accounted for less than 2% of Serbian export earnings while accounting for 43% of the entire Serbian national deficit. The problem for Serbia is not only the deficit, but the fact that the cost of logistics and transport to the Chinese market is expensive for the state and its exporters. While more than 70% of Serbian exports to China were copper, the copper in question comes from RTB Bor, owned by China’s Zijin Mining.

TECHNOLOGY PARTNERSHIP is another striking area of ​​cooperation between Beijing and Belgrade. In 2019, Serbia signed an agreement with Chinese e-commerce company Alibaba to promote Serbia as a tourist destination through its online travel agency platform, Fliggy. Similar agreements exist with WeChat and Weibo. Another Chinese company, NetDragon, has helped the Serbian Ministry of Education establish an artificial intelligence training center so that distance learning platforms can be developed to compensate for school closures during the COVID pandemic. -19. The CRBC is also involved in the construction of an industrial park intended to contain facilities for innovation and development.

But of all Chinese companies and state entities, it is tech giant Huawei that is at the heart of this partnership.