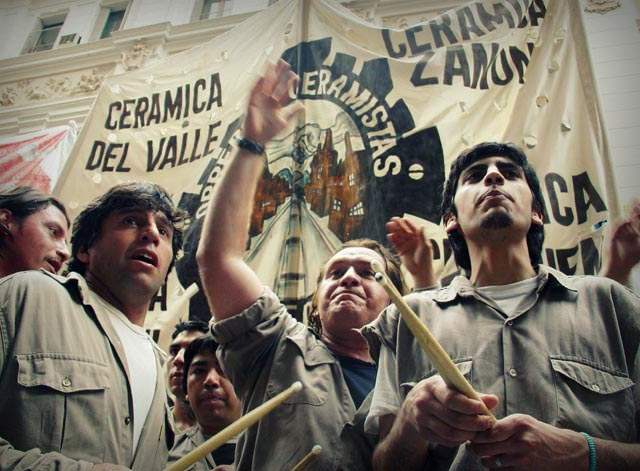 The expression “under the control of the workers” is unfortunately not what we are used to hearing. But twenty years ago, the ceramics produced in the Zanon factory in Neuquen, Argentina, began to proudly print these words. The story of the workers behind the factory takeover is full of important lessons for revolutionaries.

Workers’ control of the Zanon factory was not spontaneous. It was the result of years of grassroots activism, partial victories, growing confidence and organization among workers, and an almost revolutionary crisis – the Argentinazo (Argentine Uprising) of December 2001.

In the 1990s, discipline within the factory was so strict that any union organization outside of official channels had to be done in secret. But in 1996, when a series of planned layoffs coincided with union elections, a grassroots movement challenged right-wing officials and launched a fightback against management. The layoffs were defeated by a three-day strike that resulted in the plant manager being sacked.

That victory was the embryo of a new kind of labor movement, which led to a historic vote two years later, when the militant wing of the union – known as the Brown List, for brown-colored uniforms carried by the workers – took control of the internal Commission of the union in Zanon.

“All we could say was that we wanted to change things,” says one of the activists in the 2008 documentary Corazón de fábrica (In the heart of the factory). “We always pin our hopes on a leader, and he would sell us out, so that wasn’t going to happen. No member of the brown list would negotiate. It went well with the workers.

From that day on, the dynamics of the union and the factory began to change. Internal democracy developed and large assemblies were called to debate and vote on policy. It was because of this newfound sense of confidence that when a young worker died at the factory in 2000, workers went on strike for eight days and then voted to continue for another day even after the strike was deemed illegal. Raul Godoy, a key Zanon leader, notes in Zanon. Fábrica militante sin patrones— his book on the role of the Trotskyists in the struggle — that at the time of the vote to extend the strike, a spontaneous chant broke out: “The unity of the workers, and those who don’t like it can be screwed!

By extending the strike for just one more day, Zanon workers won better safety conditions, a permanent ambulance and doctor on site, and protection against dismissals and suspensions. And they were paid for the nine days of strike. Thus, the first seeds of workers’ control were sown, with the union gaining control of factory safety.

Throughout 2001, as an already severe economic crisis deepened, several nationwide general strikes were called by Argentine trade union confederations. In December, the government’s decision to limit bank withdrawals brought the middle classes to the streets with the working class, giving rise to what has become the rallying cry of every Latin American rebellion since: “Que se vayan todos! (They all have to go!)

Chris Harman, a Marxist who visited Argentina during the crisis, compared the situation to the revolutionary era of 1923 in Germany, when workers were closer than ever to seizing power in an advanced industrial country. “Two of the key elements in Lenin’s description of a revolutionary situation are present – the mass of the people are not ready to continue on the old path, and the ruling class itself cannot either” , he writes in the British magazine socialist review.

As the Argentinazo broke out, Zanon workers were already locked in a fierce battle against the bosses and the state government. In October, management initiated a lockout. The workers responded by occupying the premises. Within days, they had formed a workers’ guard to defend the factory and a women’s commission, which played a key role in coordinating the various elements of the struggle. Students and workers from other factories also came to show solidarity and learn from Zanon workers.

“Just like that, workers who only yesterday were rank-and-file comrades quickly became activists and leaders in a phenomenon that radically changed them,” writes Godoy. The occupation enjoyed broad popular support in the state of Neuquén. At a local university where students were raising a strike fund, Godoy notes that a popular slogan was heard: “One student, one peso. We are thousands. Thousands of pesos for the triumph of the Zanon strike!

Throughout the months of occupation, debates took place inside the factory over tactics and what victory would look like. Initially, there was no consensus on continuing the occupation. Indeed, the harsh repression suffered by state authorities has been disheartening to many. But in these difficult times, a strong core of principled leaders, in the democratic assembly system set up years before, won the case to continue the struggle and convinced wavering workers not to give up.

Inside the factory, the debates were heavily influenced by the broader movement in Argentina. A crucial moment came when the Argentinazo had its two most violent days in Buenos Aires on December 19 and 20, 2001, when at least 36 people were killed by the state. In the aftermath of the killings, Zanon workers began to realize that victory meant continuing the struggle and going even further. It was at this point that the question of restarting production under workers’ control for the first time seriously arose.

At some point during the occupation, a local judge came to the factory to explain to the workers that their occupation was illegal. Alberto Barrera, worker in the oven sector at Zanon, tells in In the heart of the factory what he said to the judge:

“Listen ma’am, I don’t know what position you’re in, but I’ll tell you that with all these years I’ve spent here in Zanon burning myself out, making sacrifices, never missing a day, you could get out… but it will be feet first… If you want a massacre on your hands, no problem. We are determined to face it. We have our hands, our slingshots and more.

In March 2002, the decision was made to restart production. At first, the workers faced great difficulties in doing so. First and foremost, it was simply a matter of acquiring the necessary raw materials – the old suppliers refused to supply them. But by turning to the wider community, workers have found solutions. Previously, the indigenous Mapuche people of Neuquén had refused to supply clay, a crucial input for ceramics, to the factory. But when the workers took over, the Mapuche people stepped in to supply it from their territory, helping the factory to restart.

“The relationship we had [before the occupation] with Zanon was a conflicted relationship, but there was a drastic change in that relationship when the Zanon workers took over the factory,” says a Mapuche activist in the documentary Zanon, the red thread. “From there began a new relationship of dialogue, respect and our needs, which strengthened our own fight.”

Another problem that arose was the acquisition of boxes. “Nobody wanted to sell us boxes,” said Rulo, a member of the purchasing committee, in an interview with scholars from the National University of La Plata. “WWe placed an ad in the Neuquen newspaper and a man who made pizza boxes came to see us. He started making boxes with a machine from 1900. Today he is our main supplier. »

When production restarted under their own control, the workers did not return to the days of strict obedience under threat of dismissal. Instead, factory relationships have been revolutionized. Every aspect of production – planning, materials, safety, wages, hiring, production, distribution – was now tailored to the needs of the workers themselves and the wider community in which they lived.

Each section of the factory elected a coordinator, who continued to work but with additional responsibility for organizational matters. All workers also elected a general factory coordinator. And everyone received the same salary.

It’s a lesson in how society could be very different if workers controlled the means of production. Instead of aimlessly producing what the bosses ordered, the workers decided what to produce. For example, to show their solidarity and gratitude to the Mapuche people, Zanon workers have produced a series of products with Mapuche art designs on them. They have also contributed to community projects such as hospitals and schools, as well as training and education for the unemployed.

Over the next decade, the workers faced several eviction attempts by local police. Ironically, pressure from the authorities forced them to stay very organized. A member of the factory workers’ guard interrogated in In the heart of the factory recounts the preparations to defend against a deportation attempt in 2003:

“We discussed it so candidly that we said, ‘Companoteros, we are ready for anything. Let’s discuss whether we use firearms or not, and how far we are willing to go”. And that night, several comrades said, “I’m staying, count on me to do anything.”

The next day, thousands of people surrounded the factory and helped foil the eviction. After years of fighting, in 2012 Zanon workers received official legal recognition of their control of the factory, which was renamed FaSinPat, a shortening of fábrica sin patrones, which means “factory without bosses” in Spanish.

Jtechnically, it remains under the control of the workers. But the harsh reality of isolation forced him to incorporate capitalist elements of production. The dynamics of the capitalist economy that forces companies to compete with each other make it impossible for even a worker-run company to escape market pressures.

Yet the heroic struggle of workers is full of lessons for socialists. It shows how workers’ consciousness can be transformed through struggle and how opportunities arise for them to exercise their power as members of their class rather than as isolated individuals. This shows the importance of building a labor movement that is independent of union leaders and that prioritizes grassroots collective decision-making. And it shows that workers don’t need bosses to manage production themselves.

Ultimately, Zanon’s legacy is perhaps best summed up by Godoy:

“Sometimes, instead of reading stories to my daughter, I would read her stories about the Russian Revolution or the (Communist) Manifest, and she was like, “It sounds good, but it’s never gonna happen.” When she was 15, she gave me a picture of a march she was on, because she’s an activist, and she said, ‘When you told me those things, I would have thought how good my father’s intentions were, but they are things that will never come true. Now after seeing what you did to Zanon, I started to believe that anything was possible.

Launch of Fintech Freetrade in Sweden

This is how solar panels are made in a factory